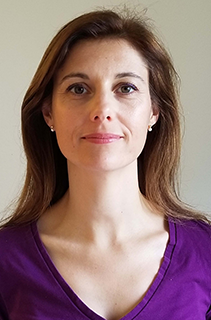 Ambre M. Bertholet, PhD is an Assistant Professor in the Department of Physiology in the David Geffen School of Medicine at UCLA. She received her B.S in Cell Biology and Physiology at Toulouse III University, Toulouse, France in 2005.

Dr. Bertholet was trained in Toulouse, France at the Université Paul Sabatier. She earned her B.S. in Cell Biology and Physiology, M.S. in Gene Cells and Development, and her Ph.D. in Biology, Health and Biotechnologies. Subsequently, she did her postdoctoral training with Dr. Yuiry Kirichok at UC San Francisco.

Her interest in mitochondria was sparked as a graduate student in the laboratory of Pr. Pascale Belenguer. During her Ph.D. research, she analyzed the influence of mitochondrial dynamics on neuronal maturation and functioning.

Mitochondria are famous for being the powerhouse of the cell. Indeed, they are the major source of the chemical energy, ATP. What is less known is that mitochondria also generate heat. In fact, every mitochondrion constantly generates the two types of energies, ATP and heat, and a fine balance between the two energy forms defines metabolic cell homeostasis. How mitochondria distribute energy between ATP and heat is certainly the most fundamental question in the field of bioenergetics, although it is still largely unknown. However, we know that increasing heat production (called mitochondrial thermogenesis), and consequently reducing ATP production, increases energy expenditure, which is one of the best ways to combat the metabolic syndrome. Thus, controlling how mitochondria distribute energy between ATP production and heat is one of the most promising targets for combating many diseases associated with mitochondrial dysfunction, such as obesity, diabetes, and age-related disorders.

Our lab will explore the mechanisms of bioenergetics using the novel mitochondrial patch-clamp assay combined with modern cellular and molecular techniques with the goal of providing a fundamental understanding of how energy production and basal metabolism control physiology.