Baljit S. Khakh received a Ph.D. degree from the University of Cambridge in 1995. During his graduate studies, he also spent some time at the Geneva Biomedical Research Institute. Dr. Khakh completed a postdoctoral fellowship in the laboratory of Dr. Graeme Henderson at the University of Bristol, followed by a fellowship at the California Institute of Technology, working in the laboratories of Drs. Henry A. Lester and Norman Davidson as a Wellcome Trust International Prize Traveling Research Fellow, and Senior Research Fellow in the Division of Biology. In 2001, Dr. Khakh returned to Cambridge in the Division of Neurobiology at the MRC Laboratory of Molecular Biology as a Group Leader. Dr. Khakh joined UCLA in April 2006, where he is now Professor of Physiology and Neurobiology. Since 2014, Dr. Khakh has been a Visiting Scientist at the Janelia Research Campus.

Roles of astrocytes in the brain. Astrocytes are a type of brain glial cell. In 1899 Cajal showed the close spatial relationships between astrocytes and neurons in the brain. Subsequent anatomical work a century later showed that a single hippocampal astrocyte can form connections with ~100,000 synapses and that individual astrocytes are tiled in non-overlapping domains. Moreover, astrocytes are known to release signaling molecules through a variety of mechanisms. These studies raise the possibility that astrocytes may regulate neuronal function. A major project in the lab seeks to investigate this possibility in the context of neuronal networks in the healthy brain as well as for models of Huntington's disease.

Neuromodulation by P2X receptors in the brain. In the past we devoted considerable effort to exploring structure-function relationships in P2X receptors. One major new direction that we have decided to take is to explore the role of P2X receptors in neuronal networks. By understanding how P2X receptors are trafficked, activated and regulated in hippocampal neurons and microglia we are exploring how ATP shapes excitability and signaling. As part of this effort we are developing non-invasive in vivo FRET and single molecule imaging approaches (with designer engineered receptors) to image receptor mobility, activation and trafficking in neurons and microglia over broad spatial and temporal scales within intact neuronal networks. 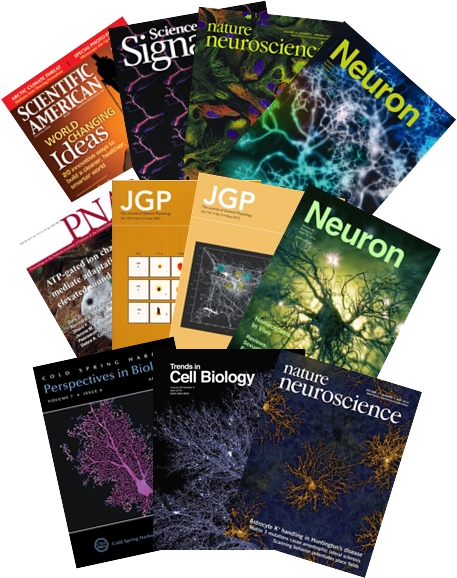